With the ever-increasing use of psychometric testing, hiring managers are either using aptitude tests already or considering incorporating testing in their recruitment process. When it seems like everyone's doing it – should you?

Should you use psychometric testing to hire?

Psychometric tests have been continually refined since the early part of the 20th century and confidence in them has risen exponentially.

Now used on a global scale, psychometric testing is used by over 75% of the Times Top 100 companies in the UK and over 80% of Fortune 500 companies in the USA. Around 81% of companies using these tests in their interview process say they expect to make more reliable hiring decisions, whereas only 67% said the same in 2010.

In short, testing is becoming a popular trend among recruiters and HR teams. Clearly it is having an important impact on hiring – but is it a method that scientifically works? 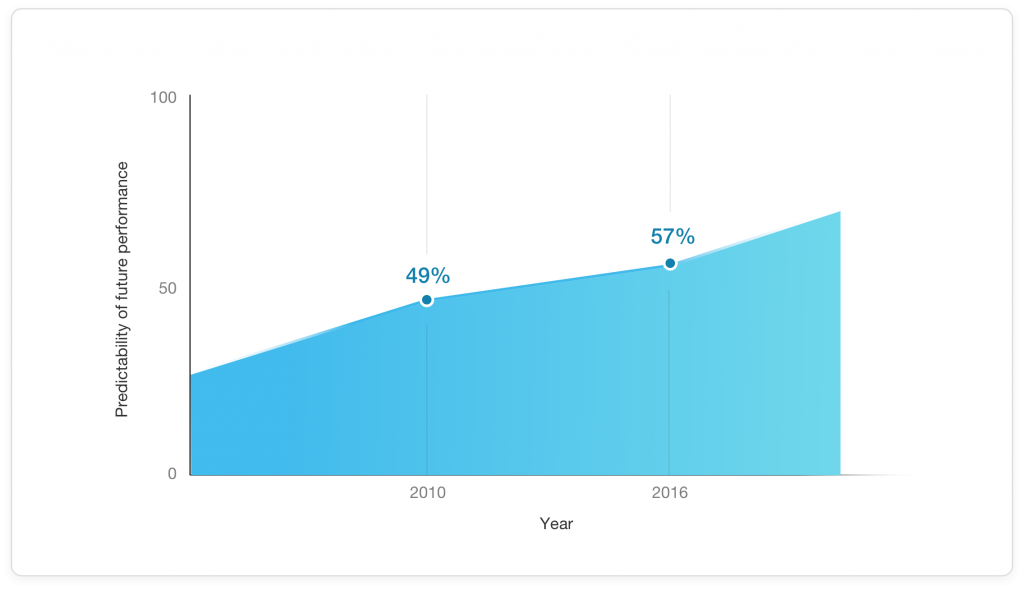 The percentage of employers who believe that psychometric testing can predict future performance has risen from 49% in 2010 to 57% in 2016, and continues to grow. More than three-quarters of HR recruitment professionals in the UK are now using psychometric testing during interviews, and 78% agree that it is a 'powerful tool' for hiring.

Psychometric tests' rise in popularity is undeniable: companies are employing these tests to help them make better hiring decisions. Aptitude testing is working and is here to stay.

It becomes even clearer to see why, when we briefly segue into the origins of psychometric testing.

The history of psychometric testing & predictability

The first psychometric test can be traced back to Charles Darwin's cousin, Sir Francis Galton, whose obsession with individual human differences (no really, he was obsessed) geared his studies towards _"_objective testing". He discovered that these tests could provide "meaningful scores".

These tests were reinvented and mass-distributed by the War Office Selection board in the UK during World War II. Subsequently they were adopted by the Civil Service and from there spread into other professions.

But how relevant are Galton's "meaningful scores"?

Since Galton's first scientific psychometric trial in 1884 there have been (literally) thousands of studies on the prediction of job performance involving preliminary testing.

For example, in 1998 Frank Schmidt and John Hunter published a meta-analysis of 85 years of research on how well assessments predict performance. In "Quantifying the Effects of Psychological Interventions on Employee Job Performance and Work-Force Productivity" they highlight: "Analysis has shown that [aptitude tests] predict performance in all jobs … [It] has shown that reliable tests yield accurate assessments of ability."

They found that the best predictor of how someone will perform in a job is a work sample test (representing 29% of an employee's performance).

This means giving candidates an exercise emulating work they would be doing in the job and evaluating it appropriately.

It is an imperfect assessment, as real performance also depends on other skills such as adaptability and teamwork. There are often too many variables to be able to present a fair representation of day-to-day work in a single work example. The close second-best predictors of performance are tests of general cognitive ability or psychometric tests (26% of an employee's performance).

These are scientifically constructed tests with definite right and wrong answers, similar in format to an IQ test. They are accurately predictive, since cognitive ability encompasses the capacity to develop, raw intelligence and learning capability.

An assessment of these qualities will give a reliable prediction about the most successful people for a job. Schmidt and Hunter conclude that those persons who perform well in psychometric testing prior to an offer of employment are more likely to fit in with the business and its values, as well as adapting to their actual role more quickly and with improved job performance.

Which leads nicely to the second quote from their paper:

"Findings show that the economic value of increased job performance resulting from use of cognitive tests in selection is substantial. Valid selection can produce major increases in work-force productivity."

Mike Smith and Ivan Robertson's paper on personnel selection also concluded that preliminary testing was a very effective method of predicting how effective a prospective hire might be at the job. They ranked the combination of aptitude tests, psychometric tests and a well structured interview process as the most efficient method, with a 63% accuracy rating.

Every employer understands the "tremendous expense" of recruitment; as Philip Carter, author of "1000 Ways to Assess Your Personality, Creativity, Intelligence and Lateral Thinking", puts it. Anything that a good hiring manager can do to ensure retention and reduce risk with hiring is ultimately a money-saving activity and therefore well worth doing.

How to shortlist candidates quickly

On average, each graduate job offer in the UK attracts 39 applications (with some larger institutions garnering 250 applications per job). It is no wonder then that employers need a method that can quickly and efficiently determine which candidates are of the best fit.

High volumes of applications can be problematic to hiring managers, especially when research has shown minimal consistency between the standard of degrees awarded by different universities, in addition to considerable deviation in a standard quality measure between subjects.

Gone are the days where university degrees are the be-all and end-all of performance indicators. In their book, Staffing Organizations (4th ed), Herbert Heneman and Timothy Judge contend that pre-hiring testing, including aptitude and psychometric, is a far more efficient method of prediction than education and interviews alone (they state that cognitive ability tests are 37% more accurate indicators of future performance than a degree certificate).

It is a fact, then, that a pre-hiring assessment tool removes human bias and assumptions about degrees and their institutions.

Graduates from all universities are assessed using the same metrics; the playing field is levelled and assumed ability associated with specific institutions or degrees is removed.

Despite its popularity and evident efficiency, there have been some cases that suggest psychometric testing does have a chink in its armour, perhaps demonstrated most infamously in Co-op Bank's misguided hiring of ill-qualified Paul Flowers as its Chairman.

Flowers was hired off the back of his promising psychometric testing results. But days after he appeared in front of the Treasury Committee to address the bank's £1.5 billion balance sheet black hole, he stepped down following an illegal drug scandal exposé. Director of the University of Cambridge's Psychometric Centre, John Rust, said: 'Openness to experience is one of the big five scales in personality testing, and clearly one that Mr Flowers may have scored highly on.'

The scandal highlighted that psychometric tests should not be used in isolation. Instead, they should be used in conjunction with face-to-face meetings or telephone interviews when making a hiring decision. Perhaps if Flowers had been asked exactly what experiences he was open to in a typical interview setting, he may not have impressed quite as much.

Is there a proven scientific link between psychometric tests and hiring the best candidate?

Yes, there is scientific evidence that links psychometric testing at interviews to better hires.

The tests offer a standardised way to measure a potential hire's mental capabilities. With these results, they are far more likely to successfully predict how effectively a candidate will adapt to their new role.

This being said, these results should always be considered in conjunction with a typical interview discussion to further evaluate results. With any scientific experiment there are outliers, variations in measurements and exceptions to rules.

However, a significant volume of data, experiments and statistics favour the psychometric test as an effective and reliable pre-hiring tool.